Flavorwire ranked the 10 ten exteriors of public libraries, and believe it or not, the Central Library of the Atlanta- Fulton system is #2: 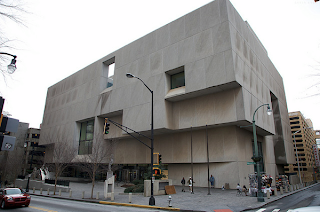 From an architectural standpoint, it's distinctive, I suppose, but it sure doesn't say "come inside and curl up with a good book" (or for that matter, even hint that books are inside it). This might have made an interesting office building, but for a library, it's a bit depressing. *

The Boston Public Library is my favorite classic exterior from this list (ranked #6 by Flavorwire):

And for a modern twist, nothing can beat the Salt Lake City Public Library (#9): 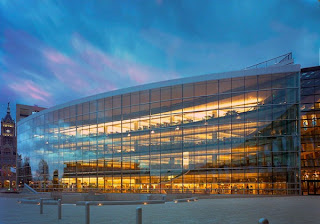 Of course, the true test of a library is what's inside, and as someone who's been in all 3 of these, the Atlanta library isn't even on the charts. The Salt Lake City is actually my all-time favorite library (I'll even give it a post of its own - someday!), and very worth a visit if you're in the area.

See the whole Flavorwire post here to see what other libraries made the cut.

*One commenter to the original post says "the Atlanta-Fulton is a dehumanizing brick" and another refers to "a couple ugly block concrete places!" Poor Atlanta!
Posted by Rachel at 7:49 PM