I'm currently reading Jane's Fame: How Jane Austen Conquered the World by Claire Harman, which tracks the ups and downs of Austen's popularity through the years, and Mark Twain is quoted thusly:


"Every time I read 'Pride and Prejudice' I want to dig [Austen] up and hit her over the skull with her own shin-bone."

I can't say I share Mr. Twain's opinion (though I do appreciate the wit), but it is interesting how critical appreciation of Ms. Austen's work has altered over time. 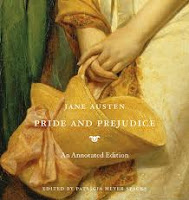 I'm also re-reading Pride and Prejudice in a lovely annotated edition edited by Patricia Meyer Spacks, as I read Jane's Fame, and the books dovetail nicely, as the annotations frequently expand on something Harman mentions, and vice versa.

Other random facts I've discovered:
-Jane Austen was so anonymous in her own time that only 2 authenticated sketches of her survive (both drawn by her sister), and one of those only shows her from behind! 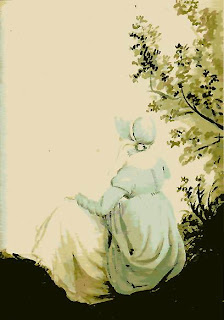 -Reading Jane Austen can be quite the comforting experience, and Karman relates that during the Great War, her work was quite popular among British soldiers for the relief it offered from the horrors of fighting. Rudyard Kipling even wrote a short story, "The Janeites", concerning this phenomenon, with an illustrated magazine cover showing a soldier at the front reading Persuasion.