Congratulations to our trivia winner, Jiaxiu!


Jane Austen’s “Pride and Prejudice” was published two hundred years (and 2 months) ago today. A modest success in Austen’s day, it often tops today’s best loved books lists. It’s estimated 50,000 copies a year are sold in Britain alone, although it’s available online Even if you haven’t read the classic, you’ve likely come across some version of it. 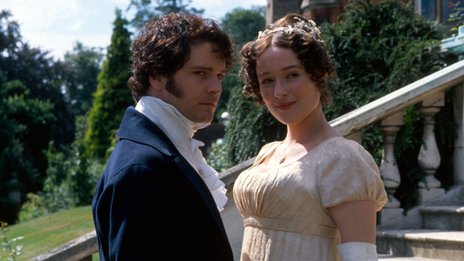 The current P&P phenomena began with the 1995 BBC series with Colin Firth and Jennifer Ehle. Firth reprised his role as a modern day Darcy in the Brigit Jones movies. P&P came to the big screen with Keira Knightly and Bollywood’s ‘Bride and Prejudice’. Time travel featured in 2008 series ‘Lost in Austen’.
Numerous spin off  novels include ‘Pride and Prejudice and Zombies’, "Darcy's Daughters, and ‘Death Comes to Pemberley’.
Britain's Royal Mail released a series of 6 beautifully illustrated stamps to commemorate the anniversary. Readings, costume balls (yes, there will be dancing!), and lectures are scheduled worldwide.
"It is a truth universally acknowledged..."
Posted by Patricia at 8:47 AM